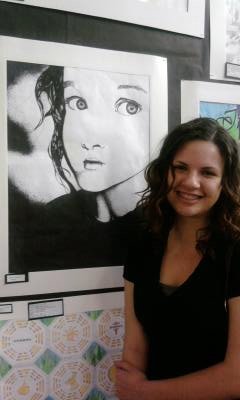 Yesterday, we attended an art show, held at a local bank, supporting art in schools, featuring two of Holly's pieces.

You can't really tell from my cell phone, however the majority of this pen and ink drawing is stippled, with tiny little dots. 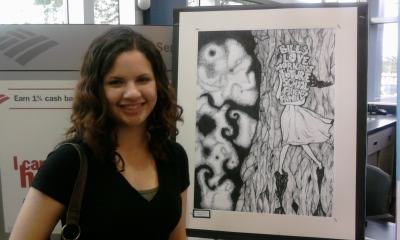 It's her vision...of herself...and, well, my inner-17-year-old totally relates to the juggling act going on in her head.

I mean, I am her mother.

To be honest, it made me a little sad to think, man, that still seems like A LOT of pressure, doesn't it?

Even more sadly, I started to over-analyze stuff, in my own head, like:

I did ask her about the bills thing, considering that she may (or, may not) have read my last post.

Warning: you're about to enter a proud mom-type blogging moment and, if this sort of stuff makes you itch, I don't blame you.  However, considering that I am her mother, stuff like this just seems all the more amazing, you know, so indulge me this one time, okay?

....she quickly pointed out that the closest thing to her heart is family.

"Read from the bottom up, not the top."

GAH...quick, someone throw me a dingy, PLEASE!

Posted in Arts and Crafts and Fartsy Stuff, Holly, Who's Parenting Who? | Permalink | 0 comments